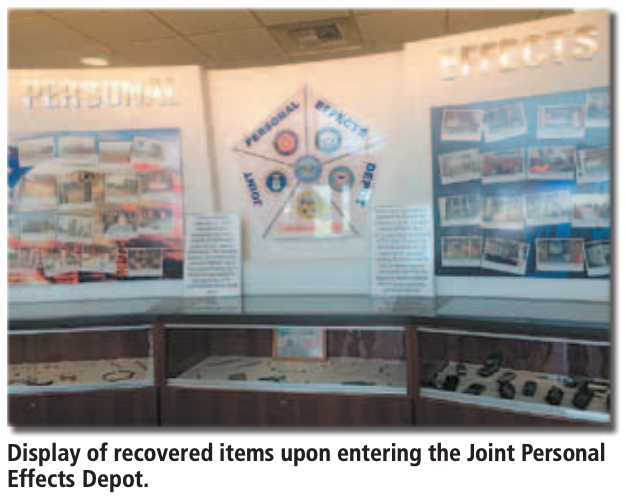 I was recently honored to join The Dodge Company’s delegation of its “Wreaths Across America” participants for an operational orientation at Dover Air Force Base. This month we continue the journey of the fallen heroes who arrive and are cared for as they are prepared to return to their hometowns for services and burial

“Let the living give thanks to our honored dead who have paid the ultimate sacrifice that the Constitution of the United States remains our guiding light.” –Rep. Bob Latta

When the embalming has been completed, restorative construction is attempted. Basic repairs were done on the preparation table, but more involved care is now given. Pictures are used, if available. If not, basic instinct and experience guide their work, ever mindful that a grieving family is awaiting their beloved soldier’s return.

At this point, a judgment is made on viewing recommendations to be recorded and passed along to the receiving funeral home. It was emphasized that these are just recommendations to help prepare the family upon their fallen hero’s return. All families have the right to make their own decision and viewing must be available to them, regardless of the embalmer’s guidance at the Carson Center.

Three of the classifications used are: Viewable (no significant head or facial wounds that would alter the appearance to the family); ID View Only (minor wounds or injuries that would be noticeable, but still allows family to know it is their relative); and Head Wrap (severe wounds to the head or face preventing restoration to a life-like appearance). If remains can be dressed, they are. The head is completely wrapped in gauze.

Every decedent is either fully dressed in uniform or in other clothes the family desires. If the soldier’s remains prevent dressing, or if only partial remains are returned, the uniform or clothes are laid on the remains as if they were fully dressed. The shirt is tucked in pressed pants, the tie knotted and around the collar, the dress coat has the shirt placed in the sleeves and crossed appropriately, socks in pants cuffs. Shoes are not used in any dressing. If any family were to open the casket, even against strong recommendations, they would see the uniform placed as it should be.

Those who cannot be dressed are wrapped in plastic, a linen sheet and a military blanket. Each layer is intricately wrapped. The sheet and the blanket are uniquely shaped to the remains, some full size and some partial. First the sheet and then the blanket are carefully pinned. A perfect row of safety pins are made at every seam, the point of each pin pointing to the head. Funeral directors that have unpinned these coverings commonly report they cannot repeat the precise pinning that the staff at Dover did.

At this point, the family has made full decisions about the future journey of their beloved soldier. The embalmers will do their job to fulfill the family’s wishes and Command, Control and Communication (C3) will coordinate the rest of the mission to return the soldier to their final resting place.

The Uniform section follows the directions received from the family through the official channels. Most families want their fallen hero returned in the appropriate military dress uniform to which they are entitled. The deceased soldier’s real uniform is likely where death occurred and not conveniently available. Therefore, this section will supply a crisp, pressed, appropriate uniform, complete with earned service ribbons. The deceased soldier’s military record is made available and the ribbons are collected from an impressive supply in the Uniform section. Every detail is completed, the uniform tailored, pressed and delivered to where the soldier is dressed.

Not all families want their soldier dressed in their uniform. Some may ask for a Hawaiian shirt and dungarees; a tee shirt and shorts. These requests are honored to the best of the facility’s ability.

The next step is for the soldier to be placed in a casket. The government offers a very suitable selection of caskets (and urns) for the fallen hero. The metal casket is an 18 gauge, steel, silver colored casket with basic silver hardware. In wood, a solid cherry colored wood casket is offered. For those expressing a desire for cremation, a cherry colored cremation casket (no handles) is used. The fully dressed soldier is sent home in the casket from Dover to be cremated locally. The urn, placed at the foot of the casket, is offered in metal or wood.

The fallen hero is now ready to be returned to his or her family. If the destination is within a 350 mile radius, including Arlington National Cemetery, they will be transported by hearse. There are two methods of air transportation used. Typically, air transportation is by military contract air – small jets that carry up to two caskets and two military escorts to regional airports closer to their final resting place. The casket is placed in an “air tray” (a wooden based bottom tray with fiberboard sidings and covers to protect the casket). The local branch of service is notified and an appropriate reception of the soldier happens as the plane comes to a halt. The soldier’s remains are placed in the awaiting hearse to be transported to their local funeral home.

As the numbers of KIA (killed in action) decline, the Department of Defense has been able to provide a more suitable, personalized return of a hero to their family. After a father, John Holley, a veteran himself, complained about how his 21-year old son, Spc. Matthew Holley, killed by a roadside bomb in Iraq, would be returned to the family, Kalitta Airlines of Ypsilanti, MI filled the need and now provides chartered jets. Their jets consist of “ball mats” to roll the caskets into position and a scissor lift. They can fly into smaller airports and the return ceremony can take place in a closed hangar. The plane rolls into a hangar, where the family and military pallbearers are waiting. The plane door opens, the lift is lowered and then extended to the level of the plane. The flag-draped casket appears from inside the plane, is placed onto the heightened lift and then is lowered to pallbearer level. The military pallbearers place the casket into the awaiting hearse and now the family can follow the hearse back to their local funeral home.

The personal effects of the fallen hero follow a different path than their former owner. The personal effects that belonged to the soldier, whether on their person or at their last station of death, are collected and placed into large containers that look like secure “tubs”. This includes clothes, phones, computers, and all the personal items you can think of. The containers are secured and sealed and sent to the JPED (Joint Personal Effects Depot).

On 9/11/2001, the personal effects of all those killed at the Pentagon were taken to nearby Ft. Myer. Realizing this was not satisfactory, a building and organization was established at Dover Air Force Base.

In the lobby of this impressive building, there is a glass case displaying cellphones recovered in the Pentagon attack that could not be reunited with a deceased and their family. Some are in good condition, some crushed and some scorched, all are waiting to tell a story of the people that owned them. Another case displays many miscellaneous items such as jewelry. One visitor recognized pilots’ wings from a uniform on display and was able to contact the family of the owner. The wings came from a crew member of the plane that flew into the Pentagon and were able to be returned to the family.

All incoming personal effects containers are first sent to be scanned for explosives in a secure room designed to withstand any charge. There is a display of items recovered such as ammo, clips, grenades and the like. An explosive ordinance detail handles these if discovered.

When the secure containers can be opened, all items are photographed and cataloged. The family has been contacted by this time and asked which things they want returned and if they wish these items to be cleaned of any bloody trauma. Anything perishable such as food items are disposed of. All items are carefully examined. Books are leafed through for any notes, cards or letters. All electronic items (laptops, phones, tablets, etc.) must have their files inspected. Attempting to open these items can be difficult without a password. Next of kin are asked if they know of a password, and if not, forensics are used.

This electronic information has to be reviewed as the soldier may have stored classified information on it. There also may be files or correspondence that could cause more pain to the family. Anything deemed to be objectionable is deleted.

We were told of one widow that contacted Dover and stated that her husband’s wedding ring was more important to her than his physical remains.We often underestimate the value of the personal effects.

“It is difficult going out there and helping with the families who wish to attend the Dignified Transfer and then coming back inside here and helping to prepare their loved one for final burial. That’s one of the hardest parts and sometimes we have to step away.” –Uniform Section, Army Reserve Staff Sergeant Luis Diaz

Next month, in the final chapter: The impressive care for the family during this process.