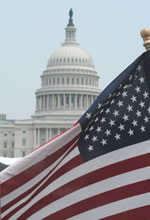 REP. STEVE SOUTHERLAND (R-Florida): He is a licensed funeral director and owner of the Southerland Funeral Home of Panama City. He spoke about Core competency; what you are most comfortable with? When you leave your core competency, things go bad. Southerland said the government is way outside their core competency as they assume more and more services and power that they were not designed to handle. Then things go badly. He told of a priest in preRevolutionary Russia that was called to the palace for an unknown reason. He was stopped by a guard as he entered the palace. The guard asked:

-Where are you going?

-What will you do when you get there?

He told the guard he would pay him every day to ask that same question, because the priest did not know and needed to be reminded of what his true mission was. Does the public know what your true purpose is? Many can provide burial or cremation, but why call you? If you don’t the answer, don’t expect the public to.

REP. LYNN JENKINS (R-Kansas): She is a CPA. Her opening line: What is the difference between a CPA and a funeral director? A CPA can file an extension for their clients. 10,000 people retire a day. At the present rate, Medicare will run out of funds in 8-12 years. She suggests making Medicare variable to age and income of each person. Some work late in life and can get health insurance. Some are wealthy enough that they don’t need Medicare. It has been 26 years since the tax code has been reformed. It was the mirror opposite of what it is now, (Republican President Reagan vs. Democratic Congress led by Tip O’Neil). Tax reform was accomplished because they worked together. No one is meeting an working together now. She threw out a good line: The tax code is thicker than a Bible but without Good News.

SEN. ANGUS KING (I-Maine): Served in Washington 40 years ago. Things have drastically changed since then. Most politicians lived in Washington, their kids went to a couple of schools and they and their parents all new each other. Politicians played golf on the weekend. Now all politicians go home very weekend and no one knows each other. King said that his favorite time is during a senate floor vote when you see on C-Span the senators milling around the front podium. He said that is the only time you get to really talk to each other as colleagues unless it is some formal meeting and usually tension filled.    King said that sequester was designed to be something stupid that no one wanted. All are still shocked that it did. The greatest impact will be felt locally as federal dollars to states and communities will be cut. King is an Independent and compromise is the key. Winston Churchill said “Americans will do the right thing; after they have tried everything else”. He thought being a senator was an impressive thing until he walked into a washroom in the senate building and a sign on the hand dryer that blows hot air said:”push button to hear a message from Senator King”. He said the real hurt was that it was in Harry Reid’s handwriting (ba dum bump bump). He said the hostility will continue until politicians on both sides get to know each other as they did years ago. He remembers 40 years ago a senator told him “It’s hard to hate someone when you know their kid’s names”.

CONNECTICUT FUNERAL DIRECTORS ASSOCIATION: John F. Cascio, Exec.Dir., Pasquale S. Folino, Pres., and Linda S. Soll, Media and Public relations, CFDA. They spoke on the Newtown massacre. There are 293 funeral homes in CT, 220 are members of CFDA. When CFDA heard of the shootings, they held an emergency board meeting and pulled out a disaster plan that was designed for the avian flu. The plan listed all the needs of a Mass Fatality and the coordination of CFDAs office and staff to handle  the massive coordination needed. Their plan converted to this tragedy quite well. CFDA contacted the Honan Funeral Home of Newtown and ASKED whether they could help. He answered PLEASE. 160 licensed funeral directors went down and helped him with 11 funerals in 7 days. The others went to other funeral homes and three went out of state. CFDA took over all phone calls for the funeral home. When the families started calling they assigned a funeral director to them who stayed with that family all the way through. Each family was assigned a state trooper who was with them everytime they had to leave their home to protect them from the public and the media.   All the victims released were taken to Carmon Funeral Home and West Haven Funeral Home who had facilities large enough to handle this many decedents. They were embalmed, reconstructed, dressed and casketed there and then driven to Honan Funeral Home with a police escort. Matthews casket donated all of the caskets, the children all having white caskets. Pasquale Folino said the sight of one white casket coming in and one white casket going out at all times will haunt him forever. Funeral directors parked cars did, crowd control, cleaned bathrooms, vacuumed, set up flowers, transported flower to the cemetery, etc. Subway corporate donated all the food for these crews. Dan Honan, owner, was able to attend each visitation and each funeral because the crews allowed him to. All in all it worked very well. Each arranging funeral director had a Honan GPL and a funeral contract that had a slash acroos the front  with a big red 0 on the balance line signed by Dan Honan.

Visited every office in the Arizona Congressional delegation (except Grijalvas) despite the “DC Blizzard” (the storm that wasn’t – though Federal government was shut down). I saw David Schweikert & Ann Kirkpatrick (very briefly). Saw Kirsten Sinema in the hallway. Our two topics were: #1 making permanent the SSI exclusion to protect prepaid funeral accounts and #2 To get funeral service represented in the Federal Mass Fatality Planning and to get the planning off the block and into shape.

Go to the NFDA website to see more information on this year’s Advocacy Summit: