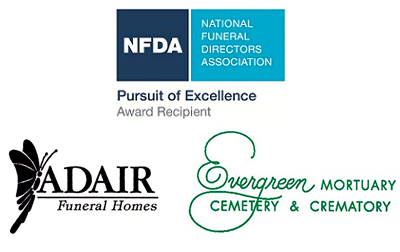 The Arizona Funeral, Cemetery and Crematory Association congratulates the owners and staff at the following Arizona funeral homes who recently were awarded the 2014 NFDA Pursuit of Excellence Award:

Congratulations! Thank you for your commitment to AFCCA’s mission of “ensuring that those who require our services receive the highest degree of professional services available, promoting continuing education, high ethical standards, and advocacy for families and professionals in the death care industry.”

2014 NFDA Pursuit of Excellence Awards: Funeral Homes Honored for Excellence in Service to Families and Communities

Brookfield, Wis. – The National Funeral Directors Association (NFDA) is pleased to announce that 151 funeral homes have earned the 2014 Pursuit of Excellence Award. The Award is presented by NFDA annually to firms that have demonstrated a commitment to raising the bar on funeral service excellence by adhering to strict ethical and professional standards and providing outstanding service to families and communities.

“The funeral homes that have earned the Pursuit of Excellence Award represent the very best in of our profession and are committed to exceeding expectations every day,” said Robert L. “Robby” Bates, CFSP, CCP, president of NFDA. “We offer our heartiest congratulations to this year’s award recipients; we are proud to count them as members of NFDA.”

To earn an NFDA Pursuit of Excellence Award, a funeral home must demonstrate proficiency in key areas of funeral service, such as compliance with state and federal regulations; providing ongoing education and professional development opportunities for staff; offering outstanding programs and resources to bereaved families; maintaining an active level of involvement in the community; participating and actively serving in the funeral service profession; and promoting funeral home services through a variety of marketing, advertising and public relations programs. Participants are also required to adhere to a Pledge of Ethical Practices.

Information about the NFDA Pursuit of Excellence program can be found by visitingwww.nfda.org/pursuitofexcellence. Registration and application materials for 2015 will be available in October 2014.