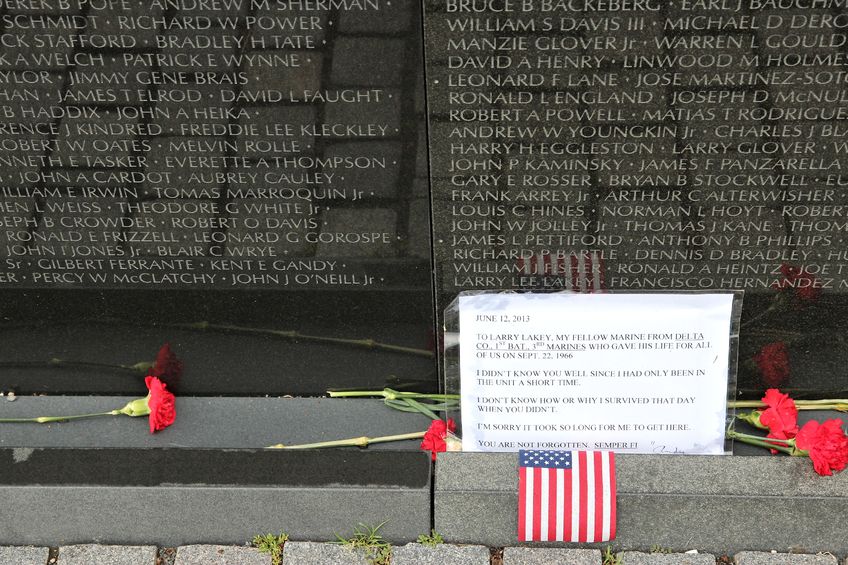 “It’s not a decision that [curators] Laura or Janet or the rangers on the ground should be making. It is a decision – the final resting place of a loved one – that should be made by the families.” –Mike Litterst,

National Park Service Barbara Otterson had to decide what to do with her husband, James Gooderum’s, cremated remains. A Vietnam War veteran, suffering from Post-Traumatic Stress Disorder, she took him to the only place she knew he would find peace; the Vietnam Veterans Memorial, “The Wall,” in Washington, DC.

Barbara left his cremated remains with a note to a fallen veteran that Jim Gooderum served with, James B. “Jimmy” Elder:

“To Jimmy: Jim carried the weight of your death every day of his life. He blamed himself for your child never having known you. He blamed himself for being in the hospital with malaria, instead of having your back when the attack came that took all your lives. The belief that he could somehow have saved you never left him. Misguided as it was, Jim never really left Nam. It took him too, in the end. So I’m leaving him with you. It’s what he wanted. I hope you’re both smiling and at peace now.”

“The Wall” was dedicated in 1982. 58,318 names of those lost in the Vietnam War are engraved into the sloping black granite wall. It has 140 shiny panels, visitors can see themselves in the reflection, uniting the living with the fallen. Hundreds of thousands of memorial items have been left by family, friends, fellow veterans and total strangers.

The Army News service reported the first item left was a Purple Heart that was thrown into the foundation of the memorial when the concrete was poured. The items have kept coming ever since. “There are Teddy Bears, belt buckles, photographs and letters, cowboy and jungle boots, flip-flops, silk roses, a Memorial and artificial Christmas tree, rag doll made from socks, dog tags by the hundreds, service ribbons, captured North Vietnamese flags, inscribed baseballs, a tree made from lollipops, and a customized Harley-Davidson chopper with the etched names of 37 Wisconsin service members who never returned from that war all on display, symbols of pain and healing to those left behind to mourn. We have a pair of cowboy boots that are similar to the type worn by many of the pilots during the war. We have a pair of black pantyhose – something many veteran nurses told me was not unusual for them to wear under their jungle fatigues so they could remind themselves they were still women in the midst of all the madness,” then Secretary of the Interior Dirk Kempthorne reported in 2007.

The National Mall and Memorial Parks takes custody of the items left at “The Wall.” Their statement on these items: “The collection is Significant for its historical value; for its potential as a source to anthropological, historical, and sociological studies; for the, motivations and stories behind the offerings; and for the ways in which the public has shaped the collection through its interactions with the VVM.”

Leon Castro, a Vietnam veteran himself, made the decision to place his brother Gordon J. Castro’s urn at the Vietnam Memorial. He told the Washington Post that his brother Gordon “left the better part of himself in Vietnam.” He placed his stainless-steel urn, with his purple heart, his silver and blue Combat Infantryman Badge and a 1st Calvary Division insignia affixed to it in his Ford pickup and drove him from Corpus Christi, Texas to Washington. He had last minute mixed feelings about leaving his brother but left him at the Memorial in the end.

Signs were posted stating that human remains, and associated objects should be not be left or scattered anywhere on the Washington Mall.

We must understand why people would choose this mode of disposition. These veterans are entitled to a proper inurnment at a national cemetery, if they were honorably discharged. They know that these urns, containers and envelopes will not be allowed to stay where they lay them.

It was reported that some of the remains are in all sorts of urns and manila envelopes, pill boxes, plastic bags and Tupperware containers. The Washington Post detailed some of those left at the Memorial. Daniel Dhee Hughes’s remains were left at “the Wall” in a 155-mm artillery shell. Master Gunnery Sergeant Ronald William Looney was left in a wooden box with the Marine Corps emblem after he died in 2008. On Veterans Day 1990, a silver container with the name “Martin Ranko” of New York appeared. A gold colored cylinder was left in 2011 with a note: “SFC William R. Shales, 174th Assault Helicopter Co., Retired 20 years of service, 3 tours of Vietnam, 1937-2011, Rest in Peace,” Roger B. Probst, Sr. was left in an envelope in 1991 with the inscription, “You finally made it. Enjoy your reunion.”

Some of the left behind cremated remains are not labeled. Some messages are brutally honest: “My wife had a drinking problem: me.”

The Missing in America Project, whose mission statement is, “Our intention is to locate, identify and inter the unclaimed cremains of American veterans,” stepped forward to see that these veterans are properly placed in a permanent home. The have made a five-year agreement with Woodbine Church and Cemetery of Manassas, Virginia, who will, at no cost, provide a 400-person in-ground vault to house only those cremains provided by the MIAP. Additionally, it will place plaques on a granite wall, with a flag memorial attached to it, to honor those veterans. The cemetery was chosen as being close as possible to “the Wall.”

When asked why people would leave behind their beloved family members at the Wall, the National Mall and Memorial Park Curator stated, “A lot of people think of the site is sacred.”

Jan Scruggs, Founder of the Vietnam Veterans Fund, told the Washington Post, “Many veterans and their families want ashes spread at ‘the Wall’ and will do as they please. The vets want to be reunited with those they remember as ‘forever young,’ who laid down their lives in Vietnam, and to ease their pain that time cannot heal.”

“It’s the closest I could get to the place that he felt most at home with his brothers in arms. I don’t know any other place you can take them other than the Wall.” –Barbara Otterson, widow of James Gooderum

Steven Palmer entered funeral service in 1971. He is an honors graduate of the New England Institute of Applied Arts & Sciences. He has  been licensed on both coasts, he owned the Westcott Funeral Homes of  Cottonwood and Camp Verde, AZ, where he remains active in operations. Steve offers his observations on current funeral service issues. He may be reached by mail at PO Box 352, Cottonwood, AZ 86326, by phone at (928)634-9566, by fax at (928)634-5156, by e-mail at steve@westcottfuneralhome.com or through his website at www.westcottfuneralhome.com or on Facebook.