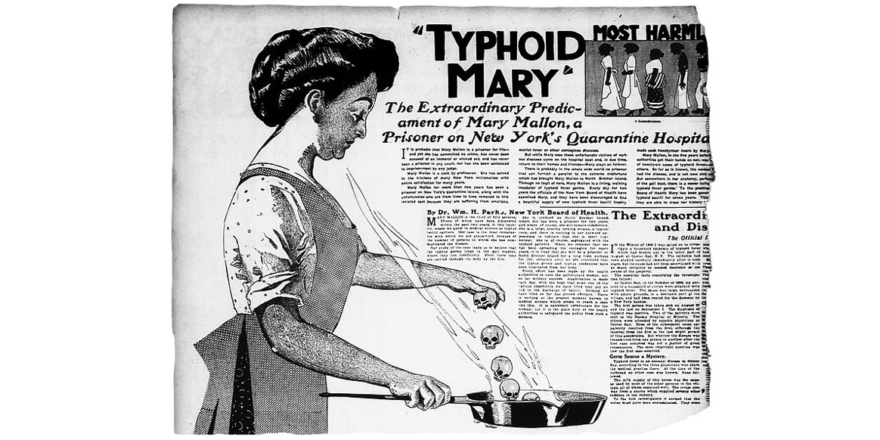 “I am an innocent human being. I have committed no crime and I am treated like an outcast—a criminal. It is unjust, outrageous, uncivilized. It seems incredible that in a Christian community a defenseless woman can be treated in this manner.” –Mary Mallon

Mary Mallon, a cook for New York’s Walter Bowen family had a knock on the door at her employment in 1907. A sanitary engineer, experienced with typhoid disease, asked Mallon for stool, urine and blood specimens. She grabbed a carving fork and threatened him. He made a retreat for the door and escaped. She did also.

He now had found “Typhoid Mary”.

Born 150 years ago on September 23, 1869 in Cookston, Ireland, her place of birth was a financially lacking area. In 1883, teenaged Mary came to the Unites States to live with her aunt and uncle in New York.

Mary never exhibited signs of a serious and contagious disease, she always found employment due to her culinary ability.

What is typhoid? A terrifying disease that could take a household in weeks. Spread through water and food sources, symptoms are fever, abdominal cramping, maybe a bloody nose. Fever increases, blood clots form under the skin and the abdomen becomes distended. Brain inflammation and intestinal hemorrhaging takes one to three out of ten.

In 1900, a family in Mamaroneck, New York hired her. Several family members became ill with the Typhoid fever within weeks of her employment.

A Manhattan family hired her. Some family members became ill with fever and diarrhea and one died.

In another home at which she cooked, seven of eight people became ill with Typhoid.

The landlord of the home Warren rented, worried about future rentals, hired George Soper, a sanitary engineer who had knowledge of typhus.

Soper researched anything that occurred in the Warren rental period, shellfish supply, plumbing in the home, and all came up harmless.

He turned his attention to cook Mary Mallon. Her employment record and the illnesses reported gave him the conclusion he needed.

In 1907, Mary was taken into custody. After her carving knife refusal to cooperate, she fought and ran. Dr. S. Josephine Baker was sent; she brought two officers with her. “She came out fighting and swearing, both of which she could do with appalling efficiency and vigor,” she wrote. “I made another effort to talk to her sensibly and asked her again to let me have the specimens, but it was of no use. By that time, she was convinced that the law was wantonly persecuting her, when she had done nothing wrong. She knew she had never had typhoid fever; she was maniacal in her integrity. There was nothing I could do but take her with us. The policemen lifted her into the ambulance and I literally sat on her all the way to the hospital; it was like being in a cage with an angry lion.”

She was placed in solitary confinement on North Brother Island where she lived in a bungalow with a fox terrier.

Mary sued the health department in 1909, as private laboratory test results were negative for the disease. The New York Supreme Court denied her motion. It was widely believed that William Randolph Hearst paid her legal expenses, as it was good press.

Mary never admitted being a carrier of the typhoid disease. However, she left employment when the disease became known. Later, she changed her name several times when applying for new positions.

How can a person infected with such a serious disease not be suffering themselves?

Stanford University was still pondering this in 2013. Science writer Bruce Goldman said of the University’s findings: “Scientists have shown how salmonella—a bacterial menace responsible for hundreds of thousands of deaths each year from typhoid fever and food poisoning—manages to hide out in immune cells, altering their metabolism to its own benefit, much as someone might remodel a newly rented home to suit his own comfort. Salmonella’s ability to position itself inside infected people’s cells for the long haul can turn them into chronic, asymptomatic carriers who, unknown to themselves or others, spread the infectious organism far and wide.”

“Between 1 and 6 percent of people infected with S. typhi, the salmonella strain that causes typhoid fever, become chronic, asymptomatic carriers,” said Denise Monack, PhD, associate professor of immunology and microbiology and the study’s senior author. “That is a huge threat to public health.”

New York Health Commissioner Ernst Lederle released Mallon if she agreed to never be employed as a cook. The health department lost track of Mary until a typhoid fever outbreak at Sloane Maternity Hospital in Manhattan in 1915.

Famed chef, the late Anthony Bourdain wrote about this Irish chef in his book Typhoid Mary (Bloomsbury, 2001). He tells the story of an immigrant trying to make her way in America and how health officials seemed to pursue her.

“I’m a chef, and what interests me is the story of a proud cook—a reasonably capable one by all accounts—who at the outset, at least, found herself utterly screwed by the forces she neither understood nor had the ability to control. I’m interested in a tormented loner, a woman in a male world, in hostile territory, frequently on the run.”

But later in his telling of her travails, he becomes critical of her. When she was released, promising not to work as a cook again, she did just that. Again, people got sick at the Sloane Maternity Hospital.

“Even taking a small chance that she could infect an infant or nursing mother with typhoid was contemptuous and contemptible,” Bourdain wrote. “That she clearly couldn’t even be bothered to wash her hands carefully after going to the bathroom…speaks volumes about how far she had fallen and how little she cared.”

Mary spent 26 years in her seclusion. She never displayed signs of the disease; she was an asymptomatic person capable of spreading a disease that she did not suffer from.

Her moniker became her identity. Cartoons showed her in an apron dropping small skulls into a skillet.

She reportedly infected at least 51 persons, at least three of whom died.

Her death, at age 69 of pneumonia, was a lonely one on November 11, 1938. Mary was reportedly cremated and buried in St. Raymond’s Cemetery in the Bronx.

“Why should I be banished like a leper and compelled to live in solitary confinement with only a dog as a companion?” – Mary Mallon

Steven Palmer entered funeral service in 1971. He is an honors graduate of the New England Institute of Applied Arts & Sciences. He has been licensed on both coasts, he owned the Westcott Funeral Homes of Cottonwood and Camp Verde, AZ, where he remains active in operations. Steve offers his observations on current funeral service issues.